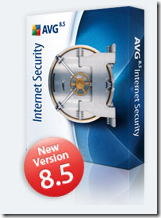 A new version of the popular AVG Free antivirus was recently released. Version 8.5 build 283 hit the market this month and is now available for download.

I think the major improvements to AVG 8.5 are personal identity protection elements that are not part of the free version. So for us cheapskates, just about everything looks, feels, and works the same.

Probably the single largest reason to consider AVG Free 8.5 is that Windows 7 is now supported for new installations. This is huge because to date, Kaspersky is about the only certified product to work with Windows 7, and that is only on a beta trial basis.

So now on to the taste test…

I had no problems upgrading a Vista PC that was running AVG 8. The process did require a reboot, but didn’t force it. The first thing I noticed is that you can finally schedule definition updates more frequently than once a day – or so I thought. I didn’t have this option in the installs I did on the Windows 7 machines, so I went back and looked at my update manager and low and behold, every 4 hours is grayed out and once a day is the only option. 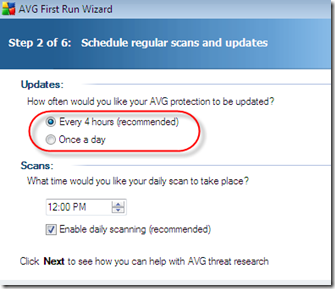 But that doesn’t stick….

I had quite a time with Windows 7 installations. I have two PC’s that are running Windows 7. One of them is a virtual machine that I used to test the upgrade process from Vista to 7 with and it already had AVG installed in the Vista instance, so it was already installed. The second PC, a physical laptop, is a clean Windows 7 build and only had the Kaspersky trial running on it.

The virtual machine bombed and rebooted itself during the upgrade process. This led to me having both AVG 8 and AVG 8.5 installed, but neither were functional. I tried a clean install and the process zipped through. This install also required a reboot, and after rebooting I tried the update process which ran as expected. A system scan was successful so I can sign off on this one.

I attempted a clean install of AVG on the laptop. The installation seemed to hang for about 10 minutes and just when I was about to give up, Kaspersky threw up some permission requests and the install completed. The next part of the install goes out and updates your definitions. I terminated Kaspersky and ran the update. The update process also took quite a while and appeared to be hung up, but it did complete successfully. I ran a full system scan and everything worked as expected. Interestingly enough, Kaspersky was flagged as generic adware, but I have learned that AVG *really* does not like being co0installed with another tool, so I think they are going out of their way to get people to uninstalled non-AVG tools.

I have no reason to not recommend an upgrade to AVG Free Antivirus 8.5. Windows 7 support is probably the best component of the new version. A clean install is the best way to go with Windows 7 deployments.