The Windows 7 beta has been released and you can try it out for yourself right now for free. One note of caution – the beta OS will expire on August 1, 2009, so be prepared to download and install a possible beta 2 or another operating system. Beta products usually imply that the vendor can pull it from you at any time and support will be extremely limited, if at all.

One of the coolest things about this beta is that you can choose which version you would like to install and test drive. I suppose on the flip side of that, the bad news is that it appears as though there will be four separate versions of Windows 7 to choose from: Home Basic, Home Premium, Business, and Ultimate. UPDATE – Lifehacker reports that the Business edition is no longer part of the lineup. It is also mentioned that an upgrade should only take 5-10 minutes, which is not consistent with my results as you can see below.

I downloaded the 64-bit version of Windows 7 and installed it as VMware guest on my Windows Vista PC. I gave it 1gb of RAM, a single CPU, and just 10gb of a system partition. I must admit, the installation was blazing fast compared to Windows installations in the past. This was a new installation (rather than an upgrade) and there was relatively zero interaction with the install process. (More on the upgrade process below.)

As you can see from the screenshot below, Windows 7 has maintained the Vista look and feel. Most notable right out of the gate is that the main navigation bar at the bottom has been cleaned up in general.

The menu bar pretty much maintains the Vista look…

Another change that people may really embrace is the User Account Control (UAC), the security feature that repeatedly asks you if you are sure you want to do something. Now, you have the option of four different levels of protection and notification…

Even Wordpad got an update. Notice the Office 2007-like ribbon menu.. 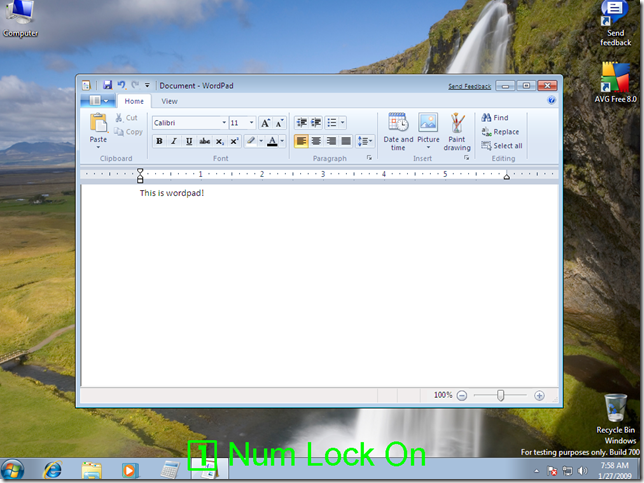 Microsoft states on the Windows 7 home page that the new OS is a product of user comments and feature requests. They take the, “you asked for it, we listened!” approach, which incidentally is what motivated Vista.

The big selling features of the OS are listed as:

The taskbar at the bottom of your screen is what you use to switch between the applications you’ve got open. In Windows 7 you can set the order in which the icons appear and they’ll stay put. They’re easier to see, too. Click once on the new large icons or bigger preview thumbnails and you’re ready to go. You can even see a full screen preview before switching to the window.

With Windows 7, we focused on keeping the things you use most right in front of you. One example: The new Jump List feature. It’s a handy way to quickly reach the files you’ve been working with. To see the files you’ve used recently, just right click on the icon on your taskbar. So right-clicking on the Word icon will show your most recent Word documents. Plus, if there are other files you want to keep handy, you can just pin them to the Jump List.

New ways to work with Windows

Windows 7 simplifies how you work with the windows on your desktop. You’ll have more intuitive ways to open, close, resize, and arrange them. You can drag open windows to screen borders, so you’ll no longer have to click on tiny objects in the corner of a window to make it do what you want.

It’s easy to copy files or compare the contents of two windows by dragging the windows to opposite sides of the screen. As your cursor touches the edge, the window will resize to fill that half of the screen.

To see all your desktop gadgets, just drag your mouse to the lower right corner of your desktop. That’ll make all the open Windows transparent—making your desktop, and the gadgets on it, immediately visible. Want to minimize all your windows? One click and it’s done.

One of the great things about PCs is how they let us use such a wide array of devices. In the past, you had to use several different screens to manage different types of devices. But With Windows 7, you’ll use a single Devices and Printers screen to connect, manage, and use whatever printers, phones, and other devices you have on-hand.

Setting up a home network can be complicated. With PCs running Windows 7, a home network will be easier to setup and a lot more useful. HomeGroup makes it easier to connect to other computers and devices on a wireless home network, so you can share files, photos, music, and printers throughout your home. To use HomeGroup, you’ll need to have at least two PCs running Windows 7. Once you’ve set up a homegroup, you can use the Network and Sharing Center to choose what you share with other homegroup members.

Nobody likes to wait. So we’ve focused on the basics that can impact the speed of your PC. Windows 7 starts up, shuts down, resumes from standby, and responds faster. You’ll have fewer interruptions and can recover more quickly from problems when they do occur because Windows 7 will help you fix them when you want.

With Windows 7, you start with a clean desktop and get to decide how it looks. We provide the templates, or themes, and you can choose the color or format, including whether you’d like to enjoy a slideshow for your desktop background.

New theme packages include rich backgrounds, 16 glass colors, sound schemes, and screensavers. You can download new themes and create your own to share with friends and family. There are plenty of choices to make it yours.

Many of you asked us to stop Windows from sending so many alerts and messages and to give you more control over messages. In Windows 7, you get to choose the messages you want to
see.

Even if you don’t change a thing, you’ll still see fewer notifications and icons popping up because the Action Center consolidates alerts from 10 Windows features, including Security Center and Windows Defender.

Rather than popping up with a message in the lower right of your screen, if Windows 7 needs your attention, you’ll see an Action Center icon and can find out more by clicking it. If you don’t have time to look at the alert immediately, Action Center will keep the information waiting for you to address later.

I used a copy of a Windows XP virtual machine for my upgrade testing. For grins, I mounted the 64-bit DVD in the running 32-bit version of XP to see if I could do an architecture upgrade at the same time. No dice. I rebooted with the 64-bit DVD mounted and the installation didn’t allow me to do that either. I could do a new install that way, but not an upgrade.

To get on with it, I mounted the 32-bit DVD that I downloaded from Microsoft in the running XP instance. Low and behold, there is not currently an upgrade path from XP to Windows 7. You must either install a new instance or upgrade to Vista first if you really need to preserve your settings.

I decided at this point to turn to an older Compaq desktop (1xCPU and 1gb RAM) that I have been running XP on ever since I finished my beta testing of Vista years ago. I attempted to upgrade from XP to Vista. I did not have the option to upgrade, so I had to perform a new install anyway:-)

…52 minutes later and I have upgraded from Windows XP to Vista Business Edition. As I remembered correctly, Vista is very slow on that machine, so I am anxious to see how Windows 7 performs on this older hardware. My curiosity got the better of me as it often does and I found a quick benchmarking tool on the web (PassMark Performance Test). I ran three tests on the Vista SP1 installation and achieved an average score of 289.2. I wish I would have thought about this and compared the Windows XP performance, but that will have to wait until another day.

…another 3 hours later downloading about 70 patches, updates, and SP1. Now that Vista is installed, patched, and benchmarked, we are finally ready to “upgrade” to Windows 7.

This time, I installed Windows 7 from within Vista using a DVD that I burned from the downloaded ISO file. The upgrade took about an hour, just like the XP upgrade. It automatically update the Vista Business edition to Windows 7 Ultimate, so it looks like the only way to choose one of the other 3 options is a clean install.

Windows 7 boots up fine and is all updated now – it actually needed two updates. Now, on to the benchmark tests. Just like the first time, I ran the test 3 times and averaged out the score. Windows 7 scored a 298.8. So it looks like while Windows 7 worked a little better, I’d bet those numbers get much closer the more you run the benchmarking tool.

Incidentally both scored a “1” on the Windows Usability Index.

After all of that it looks like Windows 7 will require hardware similar to that of Vista, which is a great thing for anyone who has purchased a new PC in the past two years or so. From a usability standpoint, it is starting to feel like this may be a milestone in the long history of notable Operating Systems.